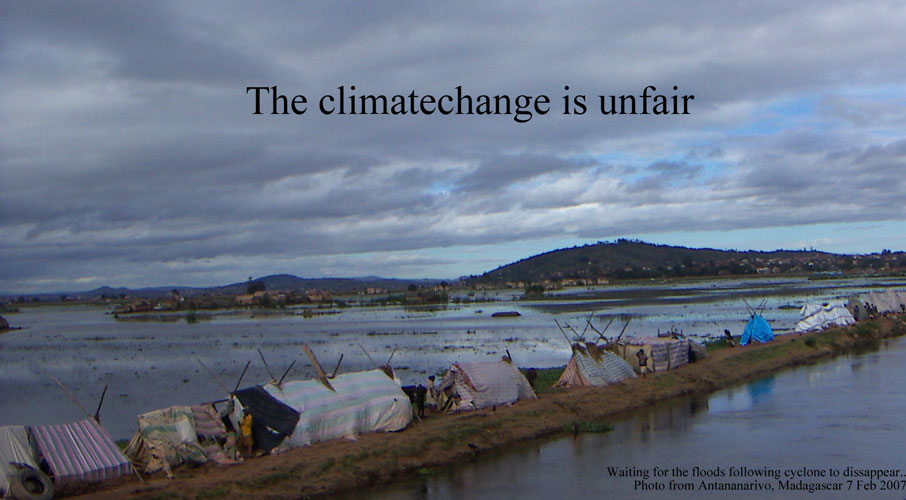 Climate change leads to natural disasters. - It is unfair that the poorest countries suffer the worst.
Madagascar is an example of an extremely poor country, which in 2017 suffered from two major natural disasters; drought and then cyclone with subsequent floods.

Worldbank Madagascar overview (13 October 2017): “Social context: While Madagascar has great potential, the country has lagged on several development indicators: almost 80% of the population lives on less than $1.90 per day, with one child in two under 5 years suffering from stunting, and Madagascar is the fifth largest country in the world with the highest number of unschooled children. Moreover, the rate of access to electricity is 13%, one of the lowest in the world. Madagascar is also one of the countries that are most exposed to extreme weather events and experiences, on average, three major natural disasters per year. In addition, repeated political crises, the last of which shook the country from 2009 to 2013, often threaten the development progress made.”
The country overview in its entirety can be found here.

During 2017, Madagascar has suffered from two major natural disasters: Drought and then the cyclone Enawo with subsequent floods. The latest (23 Nov 2017) World Bank report on Madagascar's economic situation has the title “Coping With Shocks: Madagacar’s Economic Update” Press release and the report in its entirety can be found here